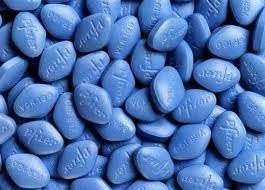 My friend, Scott, used Twitter to ask me about Viagra a couple weeks ago. He was riding on his trainer and saw an advertisement on the TV about Viagra….and he was wondering if it could enhance his athletic performance.

Introduced in 1998, Viagra is one of the trade names for the compound, sildenafil citrate. Manufactured by Pfizer, this drug is used primarily to treat erectile dysfunction (ED), but it has also found niche uses as well for the treatment of pulmonary arterial hypertension (PAH, high blood pressure in the lungs) and altitude sickness. Viagra is similar in properties to both Cialis (tadalafil) and Levitra (vardenafil).

By inhibiting an enzyme in the penis called cGMP-specific phosphodiesterase type 5, Viagra actgs by increasing bloodflow that produces an erection. We call drugs like Viagra vasodilators because they dilate the blood vessels. It’s taken in a pill form, at a dosage of 25 – 100 mg, and is recommended for use not more than once per day, sometime between 30 minutes to 4 hours prior to sexual intercourse.

But if Viagra can produce greater bloodflow in the penis, could it also produce increased bloodflow elsewhere in the body? And, as a result, might it lead to increased oxygen delivery to the muscles in a way that could enhance athletic performance?

Interestingly, we learned during the Balco investigation that many professional baseball players and other athletes were using Viagra as an on-field performance-enhancing agent. In fact, in 2008 Victor Balco claimed that the use of Viagra was even more common than the use of creatine.

The science about Viagra and athletic performance is actually very sparse.

Interest in this regard was stimulated by a study of 14 mountaineers and trekkers by a group of investigators at the University of Giessen in 2004 [1]. They studied the athletes using a cycling test at near sea level (in Giessen), with a reduced-oxygen environment, and again at Mt. Everest Base Camp (5245 m). They found that Viagra increased the maximum workload in each setting and concluded that “sildenafil is the first drug shown to increase exercise capacity during severe hypoxia both at sea level and at high altitude.”

There’s been just 1 other study in humans to show a direct benefit of Viagra on athletic performance [2]. A group of investigators from Stanford hypothesized that Viagra would improve the cardiac output (CO), arterial oxygen saturation (PaO2), and performance at altitude (relatively low oxygen environment), but would have no effect at sea level (with a normal level of atmospheric oxygen). They studied 10 cyclists with a 10 km time trial (TT) at both sea level and simulated high altitude (3874 m). At sea level, Viagra had no effect on the outcome measures. At altitude, Viagra produced higher CO, higher PaO2, and a 15% improvement in time for the 10 km TT. On review, though, the investigators found that there were actually 2 subgroups: a group of Viagra responders, who improved their TT performance by 39% and a group of non-responders who improved their TT performance by only 1% (which was not statistically significant). The authors concluded that Viagra can greatly improve cardiovascular function and performance in a low-oxygen environment for certain individuals.

But, of course typical athletes don’t compete at altitudes of 2+ miles!

The issue of whether Viagra might affect athletic performance drew the world’s attention heading into the Beijing Olympic games in 2008. In assembling its list of banned substances for 2008, the World Anti-Doping Agency (WADA) wrote:

“As regards sildenafil (Viagra), WADA is aware of studies presented in relation to the potential of sildenafil to restore pulmonary capacities at very high altitudes. WADA is currently funding a number of research projects on the effects of sildenafil at various altitudes. These projects are ongoing.”

Indeed, Viagra has not yet been added to the WADA list of banned substances.

In summary, then, Viagra is useful for the treatment of ED and PAH. Although there is some evidence of performance-enhancing effects on athletic performance (in some individuals) at altitude, there is no evidence that Viagra improves performance in typical athletic activities.